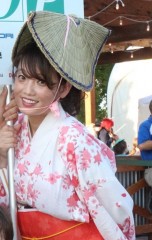 Controller Chieko Nemoto is a relatively new addition to the Enshu family, but her experience in accounting is long-standing. Chieko cut her teeth as an auditor for the Chicago branch of KPMG for 4 years. After KPMG, she spent 7 years working as an accountant for KYB Americas, developing the accounting skills and industrial knowledge she would later bring to Enshu. As a Controller for Enshu, Chieko oversees the day-to-day operations of a team of accountants.

Leading a group, Chieko relies on the extensive experiences she’s attained as a veteran number cruncher. Though that doesn’t mean she shies away from trying new things. She’s always looking to expand her comfort zone. Joining Awa Odori Chicago, she’s found a way to dance right into the unfamiliar.

Awa Odori Chicago is an organization that recreates Japan’s Awa Dance Festival, but in a smaller, Chicago-based setting. Chieko stumbled upon an ad for the group early this year, and, wanting to try something new, has been involved ever since. 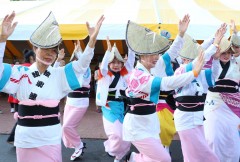 Despite having no prior dance experience, Chieko feels that practicing the Awa Odori has made her more open to exploring the unknown. “Everyone looks foolish doing the dance. We even sing the about the foolishness of the whole thing, encouraging spectators to join in,” says Chieko.

It’s clear that Chieko has benefited from the attitude of the dance, and she believes her managerial skills have improved as a result. “It’s easier to work with people if you look past worrying about seeming foolish,” says Chieko. Whether you’re calculating compounding interest or carving up the dance floor, you’re bound to look a little silly from time to time, but Chieko has learned first-hand that you’ll only get experience if you get out there and try.

ENSHU IS LOOKING FOR DEALERS